From Wikipedia, the free encyclopedia
Jump to navigation Jump to search
Wikimedia portal

The arts refers to the theory, human application and physical expression of creativity found in human cultures and societies through skills and imagination in order to produce objects, environments and experiences. Major constituents of the arts include visual arts (including architecture, ceramics, drawing, filmmaking, painting, photography, and sculpting), literary arts (including fiction, drama, poetry, and prose), performing arts (including dance, music, and theatre), and culinary arts (including cooking, chocolate making and winemaking).

Some art forms combine a visual element with performance (e.g. cinematography), or artwork with the written word (e.g. comics). From prehistoric cave paintings to modern-day films, art serves as a vessel for storytelling and conveying humankind's relationship with the environment. (Full article...) 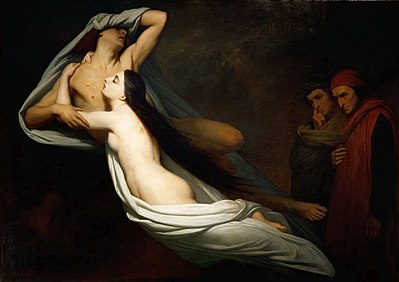 Francesca da Rimini and Paolo Malatesta Appraised by Dante and Virgil is a composition painted in at least five very similar versions by Dutch¨CFrench Romantic painter Ary Scheffer; all are in oils on canvas. The paintings depict a scene from Dante's Inferno. A pair of lovers, Francesca da Rimini and Paolo Malatesta, are shown in Hell, while Dante and Virgil are on the right viewing them. A stab wound is visible on Malatesta's chest, signifying the pair's murder by his brother, Giovanni, who was da Rimini's husband. This picture is the version of the painting painted in 1855, which hangs in the Louvre in Paris. The original, dating to 1835, is now in the Wallace Collection in London. Others exist in collections in the Hamburger Kunsthalle, the Cleveland Museum of Art in Ohio, and Pittsburgh's Carnegie Museum of Art.

More did you know

Robert Peake the Elder (c. 1551¨C1619) was an English painter active in the later part of Elizabeth I's reign and for most of the reign of James I. In 1604, he was appointed picture maker to the heir to the throne, Prince Henry, and in 1607, serjeant-painter to King James I, a post he shared with John De Critz. Peake is often called "the elder", to distinguish him from his son, the painter and print seller William Peake (c. 1580¨C1639) and from his grandson, Sir Robert Peake (c. 1605¨C1667), who followed his father into the family print-selling business. Peake was the only English-born painter of a group of four artists whose workshops were closely connected. The others were De Critz, Marcus Gheeraerts the Younger, and the miniature-painter Isaac Oliver. Between 1590 and about 1625, they specialised in brilliantly coloured, full-length "costume pieces" (example pictured) that are unique to England at this time. It is not always possible to attribute authorship among Peake, De Critz, Gheeraerts and their assistants with certainty. (Full article...)

What are WikiProjects?
edit

Things you can do