From Wikipedia, the free encyclopedia
Jump to navigation Jump to search
Prison in California 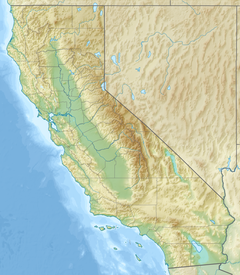 Folsom State Prison (FSP) is a California State Prison in Folsom, California, U.S., approximately 20 mi (30 km) northeast of the state capital of Sacramento. It is one of 35 adult institutions operated by the California Department of Corrections and Rehabilitation.[2]

Opened in 1880, Folsom is the state's second-oldest prison, after San Quentin, and the first in the United States to have electricity.[3] Folsom was also one of the first maximum security prisons, and has been the execution location of 93 condemned prisoners.[4]

Musician Johnny Cash put on two live performances at the prison on January 13, 1968. These were recorded and released as a live album titled At Folsom Prison.[5][6][7] He had written and recorded the song "Folsom Prison Blues" over a decade earlier.

Both FSP and California State Prison, Sacramento (SAC) share the mailing address: Represa, CA 95671.[8][9] Represa (translated as "dam" from the Spanish language) is the name given in 1892 to the State Prison post office because of its proximity to a dam on the American River that was under construction at the time. The dam was replaced in 1955 by the Folsom Dam.[10]

The facility includes five housing units within the secure perimeter, including the original two-tiered structure. Unit 1 is the most populous cellblock in the United States, with a capacity of nearly 1,200 inmates on four five-tiered sections.[when?][citation needed] All cells include a toilet, sink, bunks, and storage space for inmate possessions.[citation needed]

FSP is California's second-oldest prison, long known for its harsh conditions in the decades following the California Gold Rush. Although FSP now houses primarily medium security prisoners, it was one of America's first maximum-security prisons.

Construction of the facility began in 1857 on the site of the Stony Bar mining camp along the American River. The prison officially opened in 1880 with a capacity of 1,800 inmates. They spent most of their time in the dark, behind solid boiler plate doors in stone cells measuring 4 by 8 ft (1.2 by 2.4 m) with 6-inch (15 cm) eye slots. Air holes were drilled into the cell doors in the 1940s,[7] and the cell doors are still in use today.

FSP was the first prison in the world to have electric power, which was provided by the first hydroelectric powerhouse in California.[citation needed]

After the state of California took sole control of the death penalty in 1891, executions were held at Folsom and San Quentin. A total of 93 prisoners were hanged at FSP between December 13, 1895, and December 3, 1937. Subsequent executions were carried out in the gas chamber at San Quentin.[11] Due to an incorrect record, it is often mistaken that there were 92 executions, but there were in fact 93.[12]

The prison's first hanging occurred on 13 December 1895 when Chen Hane was "hanged by the neck until dead" at 10:00 am. The public was invited to witness the execution. In 1892 Hane was accused of murdering Lee Gong, even though a witness stated they saw Lee Sam shoot Gong; another said they thought Gong had been shot through a window while sitting at a desk.

FSP industries include metal fabrication and a print shop, and the quarry at FSP provided granite for the foundation of the state capitol building and much of the gravel used in the early construction of California's roads. Additionally, California's vehicle license plates have been manufactured at FSP since the 1930s.

In 1968, Johnny Cash played a concert at the prison. Each attending prisoner lived in his own cell and nearly all were in an education program or learning a trade. Most of the attending prisoners who were released did not return to prison after being released.[13]

Laura Sullivan of National Public Radio said that the costs of housing prisoners "barely registered" in the state's budget. In 2009, Folsom was overcrowded, with 4,427 inmates. Around that year most of its prisoners who were released returned to prison after being released.[13] 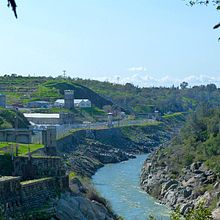 Folsom Prison from north side near the American River, 2011

California Prison Industry Authority (CALPIA) program includes administration, a Braille enterprise, a license plate factory where the inmates have been making California license plates since before the 1930s, maintenance, metal fabrication, a printing plant, and a sign shop.[14]

In January 2013 the Folsom Women's Facility, a standalone section for women, opened. The northernmost women's prison in the CDCR, the facility has space for 403 women.[15] As of 2013, 25% of the women were Hispanic. The prison houses low-risk prisoners.[16]

Folsom was one of the first maximum-security prisons in the United States. Prior to the completion of its granite wall in the 1920s, the prison saw numerous escape attempts; the first occurred shortly after the first inmates arrived in the 1880s. Throughout Folsom's violent and bloody history, numerous riots and escape attempts have resulted in both inmate and staff deaths.

In 1920, three convicts hijacked a prison train that was used to move materials and smashed it through a prison gate to escape.[17]

On June 16, Dwight E. Abbott, 24, a Los Angeles robber, escaped from Folsom by making a lifelike dummy. The dummy was cleverly made to look real enough with Abbott's own hair, that of his cellmate, and a plaster of Paris face, to fool the guards until late the next day. This, according to the Warden, was seen in his bed and deceived the guards until general lock-up.[18]

An inmate, Carl Reese, tried to escape in 1932 using a diving suit fashioned from a football bladder, a goggle lens, and other scrounged materials. According to Floyd Davis, a prison guard of 13 years who continued to volunteer at the museum after his retirement, the inmate only made one mistake: he didn't make his breathing tube long enough and ended up drowning in the power-house-mill pond.[17] Guards had to drain the pond to recover the inmate's body.[17]

Approximately 40 inmates had been waiting to talk to Warden Clarence Larkin concerning upcoming parole hearings when seven of the inmates suddenly attacked him.[19] As they took him into the yard, other guards started firing. In the commotion that followed, Officer Harry Martin and Warden Larkin were both stabbed to death. Officer Martin died at the scene, and Warden Larkin died of his wounds five days later.[19]

The inmates involved in the attack were said to have attacked the Warden and the officer with shanks (prison-made knives). Also, a prison-made wooden semiautomatic pistol was found; it was carved and meant for use in the attack.

One of the seven inmates who attempted to escape was wanted for the murder of Officer James Hill, of the Marlow, Oklahoma Police Department, on April 20, 1931.[19]

In 1987, Godwin attempted to escape during his incarceration at Deuel Vocational Institute in Tracy, California, and he was moved to the maximum-security Folsom State Prison.

Authorities believe Godwin's wife, Shelly Rose Godwin, and his former cellmate in Deuel, Lorenz Karlic, helped to plan his successful escape from Folsom.[21] A hacksaw and other tools had been smuggled into the prison for Godwin. On June 5, 1987, he cut a hole through fence wire and escaped into a storm drain that emptied into the American River. Godwin dropped through a manhole and crawled 750 feet through the pitch black drain. Either Godwin's wife or his accomplice Karlic had left a raft that Godwin used to float down the river, following painted arrows on rocks that directed him where to go.[21]

In June 1987, Karlic was arrested in Hesperia, California,[22] and convicted for aiding Godwin's escape.[23] In January 1988, Shelly Godwin was classified as a federal fugitive for her role in her husband's escape. The FBI captured her in Dallas, Texas, on February 7, 1990.[24]

Godwin was arrested in Mexico in 1991 but escaped again from a prison in Guadalajara in September of that year and remains at large.[25]

Prison spokesman Lt. Anthony Gentile did not elaborate on the circumstances of how the men got away, only saying that the two men fled from the prison's Minimum Support Facility,[26] and that the escape was discovered when the two failed to report to their work areas.[27]

Inmate Todd Willis walked away at about 8 A.M. from a minimum-security housing facility at the prison; five days later on October 31, 2017, an off-duty officer was driving through Rancho Cordova when she spotted him. Police were contacted and Willis was quickly apprehended.[29]

In 1937, Warden Clarence Larkin was stabbed during an escape attempt and died from his wounds.[30]

On August 27, 2010, seven federal inmates at Folsom were admitted to a hospital after corrections officers discharged firearms during a riot involving 200 inmates. None of the inmates' injuries were life-threatening, and no corrections officers were injured during the incident.[31]

On Wednesday, September 19, 2012, a fight erupted in one of the yards, shortly after 11:00 am. No prison staffers are believed injured and the fight was eventually broken up by the prison guards (using less-than-lethal force), but one inmate was shot and at least ten other inmates had stab or slash wounds, authorities stated (they were treated at area hospitals).[32]

Singer Johnny Cash made FSP widely known to the outside world through his song "Folsom Prison Blues" (1956) ¨C which narrated a fictional account of an outlaw's incarceration, and through the two live concerts he performed at FSP. The first was in 1966; the more famous, held on January 13, 1968 in the FSP cafeteria, was recorded as the album At Folsom Prison. Cash later said the FSP inmates "were the most enthusiastic audience I ever played."[33] The "Folsom Prison Blues" single from that album was #1 on the country music chart for four weeks, and the album was on the top 200 pop album chart for 122 weeks.[33] A 40th-anniversary tribute concert was to take place in the same cafeteria at FSP on January 13, 2008, with a special appearance by Cash's original drummer W.S. "Fluke" Holland.[34] The original plans were to stream the concert over the Internet, with four nonprofit groups underwriting the show and sharing in any proceeds from the show.[34] However, a few days before the concert was to occur, it was canceled in a dispute over filming rights, media access, and security concerns.[35]

To celebrate the 50th anniversary of Cash's groundbreaking concert, the California norte?o band Los Tigres del Norte performed for both male and female inmates at FSP. The performances were filmed as part of a Netflix special, and was released in September 2019.

FSP has been the location of a number of feature films, including Riot in Cell Block 11, Convicts 4, American Me, The Jericho Mile, Another 48 Hrs., Diggstown, parts of Walk the Line (a biographical film of Johnny Cash), and Inside the Walls of Folsom Prison.

On the M-5 freeway in Farmington Hills, MI, two service drives ¨C named Folsom and Freedom ¨C are adjacent to the eastbound and westbound sides respectively.

Folsom Prison is mentioned in The Offspring's 1998 song, "Walla Walla." However, the implied or mistaken location of Folsom is in Walla Walla, Washington, based on the song's lyrics.

New Folsom Prison in Starcraft II: Wings of Liberty was named after the facility.